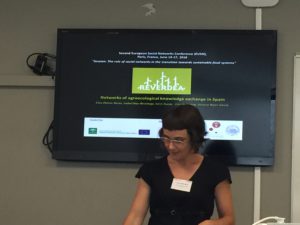 Between 14th-17th June the 2nd European Conference on Social Networks has taken place in Paris. Within a session on “Sustainable food systems”, Elisa Oteros Rozas and Isabel Díaz Reviriego have had the opportunity to share an oral communication about some preliminary results of the social network analysis of livestock farming knowledge exchange in the Sierra Norte of Madrid. The work shows two clearly different livestock farming models. One can be called the “locals” one, the one of those that are older, that have been always living in the area, that have always been farmers and are frequently descending from farmers. The other one is that of so-called “new peasants”, youngsters that live in the area since relatively little time, whose main occupation is livestock farming but work on it collectively. The first, the locals, focus on rasing cattle, mainly for wholesale markets that allow them to rent grasslands and get most of their income from farming, including a large proportion of subsidies. The second, the new peasants, mostly breed small rumiants, sheep and goats, from more rustic and/or autochthonous breeds by devoting more hours per day to herding, however alloing them to obtain a wider range of products to either sell directly to consumers, to barter or for self consumption. While the main sources of information for locals are the regional trade union, the local agrarian office and the animal health associations, together with family members, new peasants rely mostly on books, friends or shareholders from their cooperatives. In a first exploration of the networks of knowledge exchange about livestock management we identified two groups of farmers: one is clearly formed only by local farmers. The other one hosts two subnetwork: one of locals and one of new peasants. These two subnetworks are linked by two women farmers (new peasants) that facilitate knowledge exchange between the two groups. In other knowledge domains such as animal health and bureaucratic issues, locals seem to share information with very few people, while new peasants do share advice with their peers to a greater extent. In all networks analysed so far, women farmers showed the larger betweennes in the network, i.e. they play a key role in knowledge flows, particularly between locals and new peasants. The presentation (in English) can be seen HERE and the poster (in Spanish) presented at the VI International Agroecology Conference can be accesed HERE.